An excerpt from Dear Luke, We Need to Talk. Darth, by John Moe.

Attention, all law enforcement in the region:

I realize many of you have become cynical about the all-points bulletins issued for dangerous criminals. I’m sure you think they’re essentially all the same and that only the names have changed. But I urge you to pay close attention in your pursuit of Mr. Jon Bon Jovi. He’s wanted. Wanted dead or alive.

Who is Bon Jovi? Well, to begin with, he’s a cowboy. Granted, it’s fairly routine for cowboys to run afoul of the law, especially in the winter, when the work and money dry up and they’ve got time on their hands. Plenty of petty theft, public intoxication, and lewd-behavior calls. But that’s not what we’re up against. Bon Jovi is no regular cowboy. He rides a horse made of steel. A steel horse.

I am not shitting you. 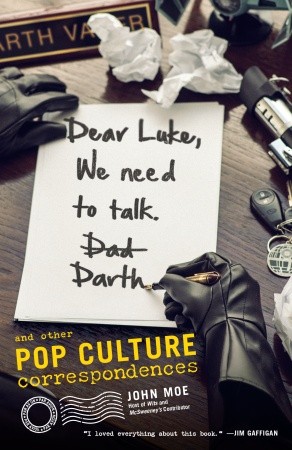 And don’t think this is some sort of comical clunky robot horse with whimsical hydraulic sound effects and extraneous ﬂashing lights. This thing is exactly like a thoroughbred, only much larger and made from an incredibly resilient alloy. Bullets can’t even penetrate this horse, much less stop it. Bon Jovi is also armed with a loaded six-string that he carries on his back. Reports differ on whether he uses it as a sort of crossbow or whether it’s actually a guitar that he plays with such shocking mastery as to render victims helpless. Regardless, take heed.

There is other information I need to share with you about Bon Jovi. And no matter how callous you think you are to the attributes of criminals, you may want to brace yourself. Bon Jovi has almost superhuman abilities. Sure, sometimes he sleeps, but sometimes he can go for days without doing so. Days! To compensate for this interruption in his circadian rhythms, Bon Jovi has evidently crafted some sort of alcohol-based calendar, where he can actually tell the day by the bottle that he drinks.

So why are we looking for Bon Jovi? Why is he wanted, wanted dead or alive? A spree of face rocking. Estimates vary as to how many faces have been targeted — some say 800,000, some say 1.2million — but it is accepted as a fact that he has rocked every single face he has seen. Every one of them. We’re not even clear on a motive for this mass face rocking, although there are reports of Bon Jovi complaining of faces that “are so cold.”

Will he stop at a million faces? How many will be enough? We can’t afford to ﬁnd out.

Now all this being said, if you should come in contact with Bon Jovi, do not look into his face. He will only rock your face. And call for backup immediately.

Good luck to you all. At this point, I have to be honest. We’re living on a prayer.